Hustle is for Amateurs (Do These 8 Things Instead)

Do you ever feel like your hustle just isn’t paying off? 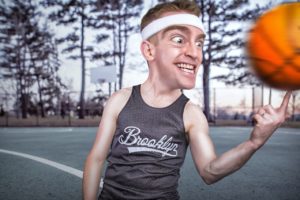 Some spastic guy on Youtube, eyes bulging, frantically swears hustle is the solution to all your problems.

“If hustle isn’t bringing you results, you must not be hustling enough,” he chants.

What are you supposed to do? Dare you argue with this infallible internet expert?

But something inside you screams, “This is miserable! If this is success I don’t want it. There has to be a better way.”

Hustle is for amateurs. Here are 8 reasons why (and what you should do to go pro).

You get what you measure. — Anonymous

I hate listening to insecure high achievers try to one-up each other about who is hustling more.

There is no prize for hustle. We work for results.

In the early stages of pursuing a goal, you may not have much to show for your work, and that’s fine. But even here, celebrate the tasks you complete. Not how little you sleep or how long you work.

Inefficiency is not something to brag about.

“Dude, I stayed up all night writing a blog post. I could barely keep my eyes open. #Hustle”

“Dude, I got a good night’s sleep and wrote a blog post in one hour this morning. #Efficient”

How to Go Pro: Don’t measure how hard you work. Measure how much you get done.

Hustle is based on fear. Pros trust themselves.

“Our doubts are traitors, and make us lose the good we oft might win, by fearing to attempt.” ― William Shakespeare, Measure for Measure

At its core, hustle is an inability to say “No.” And one of the biggest causes of indecisiveness is self-doubt.

People who can’t say “No” are fearful. They don’t trust themselves to make the right decisions. So they always say “Yes.”

They think, “If I do absolutely everything possible and still fail, it won’t be my fault.”

But success doesn’t usually hinge on one decision. It comes from making mostly good decisions over time.

And here’s the thing. You are going to fail. Absolutely every successful person does. Because people who keep failing (and learning) eventually succeed.

How to Go Pro: Trust yourself to make good decisions and to learn from the bad ones. Be prepared to forgive yourself for the mistakes you are certain to make.

Hustle is not habit forming.

Successful people are simply those with successful habits. — Brian Tracy

It was a sweaty evening in Choctaw, Oklahoma when the best golfer I’ve ever played with told me the key to a great round.

His point was clear. Invest in the fundamentals until your habits are engines of success.

Hustle might move you forward, but it doesn’t set you up for sustainable success. Good habits are formed through consistency and repetition, not mindless effort.

So play the long game. Ask yourself, “If I could wish for any skill I wanted, what would I choose?”

Then, practice your way to proficiency.

How to Go Pro: Get really good at what matters most, even if it means doing less.

Hustle leads to burnout (the #1 cause of ultimate failure).

The biggest threat to your success is giving up too soon.

That’s not just my opinion. In one research study, Dr. Angela Duckworth found that Grit, “perseverance and passion for long-term goals,” predicted success “better than any other predictor.”

It makes sense. No one who quits a goal achieves it.

And in my experience, we’re exponentially more likely to give up than we are to encounter a truly insurmountable obstacle.

Here’s why this matters:

If sticking with your goals is a top predictor of success, and quitting logically leads to failure, you need to be careful with strategies that will tempt you to quit.

“Strategy” is a generous way to describe hustle, but the point remains. Hustle leads to burnout. Burnout leads to bail out.

How to go pro: Don’t maximize effort and tempt yourself to quit. Maximize sustainability — a true predictor of success.

Hustle forgets the big picture, jeopardizing where you’ll end up.

“If you don’t know where you are going, any road will get you there.” — Lewis Carroll

The Hobbit tells the story of 13 dwarves, a wizard, and a hobbit named Bilbo, who set off in search of a lonely mountain fortress.

The journey beckons the adventurers into a dense forrest, where they find themselves helplessly lost.

With giant, venomous spiders closing in, Bilbo shimmies up a tall tree, pokes his head through the leaves, and spots the Lonely Mountain in the clear evening light.

This simple act of pausing gives Bilbo the big picture. It’s the difference between wandering lost and marching with aim.

Hustle might get you somewhere, but is it where you want to go? Pause to locate the best paths to your destination.

How to Go Pro: Don’t hustle your way into a life you hate. Filter your choices through your values and your goals. Say “No” to bad fits.

Hustle overlooks the need for systems, which slows growth by constraining capacity.

A good system shortens the road to the goal. — Orison Swett Marden

In college I worked retail, and one day I sold jeans to an entrepreneur who’s now making $8 million per year.

He told me, “I’m always experimenting. And when I find something that’s worth doing, I create a system and either automate or delegate the task. Then I go do more experiments.”

Hustlers find something that’s working and add it to their daily to-do list.

Pros wonder, “Could I pay someone else to schedule my blog posts and social media?

“Could a knowledge base reduce the number of customer support emails I receive?”

How to Go Pro: Value your time as the engine of your growth. Protect it by creating systems and automating or delegating.

People who are overworked underperform. In fact…

The Harvard Business Review argues that, according to research, people who overwork themselves with long hours don’t seem to actually accomplish more than people who work less.

To me, that’s a massive waste — time spent working without getting anything done.

Imagine what you could be doing with that time!

Perhaps your biggest opportunity cost is rest, which would prepare you for greater productivity tomorrow.

Which is better: Working 12 hours one day and sleeping at your desk the next day? Or just working 8 hours both days?

How to Go Pro: You are not a robot. Treat your mind and body with respect by taking time to rest.

Hustle reinvents the wheel. Pros build on what works.

At the task level, this looks like trying to teach yourself web design instead of using a WordPress theme or hiring someone who knows what they’re doing.

At the startup level, reinventing the wheel takes the form of chasing after unclear visions instead of investing your time in proven models.

A great example of NOT reinventing the wheel? Caviar.

No, not the fish eggs…

Caviar was founded in 2012 by a team of entrepreneurs who wanted to compete in the food delivery space. Rather than trying to reinvent the model, they sought to become “a curated Seamless” by only working with restaurants that had at least 4 stars on Yelp.

This simple realignment of the wheel worked. In 2015, according to this Caviar review, the company was acquired by Square for a rumored $90 million. Not bad for three year’s work! (Here’s where to find a Caviar coupon code if you want to see the service in action.)

How to Go Pro: Innovation is awesome, but for entrepreneurs whose primary goal is to start a successful business, don’t chase after nebulous ideas when you can reverse engineer something that works.

Imagine an expert consultant telling you, “I’ve spotted a bad habit that’s hurting your productivity, focus, and efficiency—plus it’s tempting you to give up.”

Would you want to make a change?

Research and common sense say hustle is one such habit.