No one succeeds at big goals that matter without failing along the way.

So unless you survive the failures, you’ll never succeed at all. 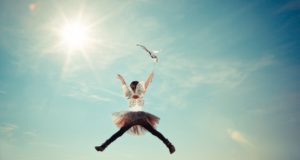 In this post, I’ll teach you a simple but crucial mindset shift to help you persevere through setbacks and challenges without giving up.

Because people who don’t give up are capable of amazing things.

What Buzz Lightyear knows that you don’t

Growing up, Toy Story was one of my favorite movies. Since it’s now over twenty years old—yikes­—I’ll give you a quick refresher.

An uptight sheriff doll named Woody, who belongs to a boy named Andy, has his world turned upside down when a shiny new toy shows up in Andy’s bedroom. This new toy is Buzz Lightyear, a fancy action figure with buttons, lasers, and wings that shoot out of his back. Buzz is a cool toy, but what’s interesting is, Buzz thinks he’s an actual space ranger. His arrogant behavior sends the already tightly wound Woody over the edge.

Their argument escalates quickly and comes to center around one claim. Buzz believes he can fly. After bouncing around the room doing micro-parkour, most of Andy’s other toys agree. But not Woody.

When Andy accidentally forgets Woody and Buzz at a pizza restaurant, the two rivals have to work together to find their way home.

In the process, Buzz comes across a TV commercial that reveals, to his horror, Woody was right. Buzz is not a space ranger; he’s just a toy. And if that weren’t bad enough, he’s not a flying toy.

Refusing to believe what he’s heard, Buzz climbs to the top of a staircase, spreads his wings, and jumps. He crashes to the ground, losing an arm in the process.

Buzz is truly ruined. With no sense of self worth, he’s robbed of all purpose.

Seeing Buzz despondent, Woody tries to encourage him. He admits that he was jealous of Buzz’s bells and whistles, and tells him that while he is just a toy, he’s a very cool toy, and he has the power to do something meaningful by making life more fun for his owner Andy.

Soon after, Woody is taken prisoner by an unstable teenager who tears apart toys for fun. So Buzz resolves to overcome both his insecurities and his arrogance, by working together with other toys to save his only friend.

In a daring rescue, Buzz launches himself from a bottle rocket to grab Woody before soaring into the sky. When the rocket’s flare dies out, Buzz spreads his wings, and glides toward the ground with Woody in his arms. Seeing what Buzz is capable of, Woody is amazed, and without a hint of bitterness, he shouts, “Buzz, you’re flying!”

But Buzz, remembering his tumble down the stairs, humbly explains, “This isn’t flying; it’s falling with style.”

Why falling with style is the best kept secret of success

Every day, overconfident dreamers, who don’t understand the journey of success, invite everyone they know to watch as they leap from dangerous heights, embarking on an unexpected date with gravity. Wounded, ashamed, and shocked, many, after hitting the ground, never get back up to try again. They mistakenly believe their error was in dreaming big, taking risks. They feel worthless, as the talents they so prized are proven insufficient, and they realize they’re no better than the people they wanted to impress.

The world isn’t divided into talented space rangers and lowly toys. We’re all toys. Depending on how you view yourself, that even playing field may be encouraging. Or, like Buzz, you might take offense, thinking, “He’s just trying to hold me down. To keep my from flying.”

But that’s the thing, isn’t it? You can’t fly. You weren’t born with some exceptional power that will allow you to bypass the challenge and struggles required to succeed. You’re going to have to work hard, strengthen your weaknesses, and fail often. If I don’t tell you that, gravity will, as it reminds me every day.

But that’s not a reason to quit either. Even though you and I are no better than the other toys, we are uniquely equipped, each with our own buttons and lasers. And when we, in community, acknowledge our weaknesses and combine our talents in service to others, we can accomplish amazing things.

How to pay this mindset forward

The road to success is paved with a thousand failures, but most people don’t know that. And when you reach your goals, admirers will look at you and exclaim, “Wow, you’re flying!” But by the time you’ve made it that far, you’ll know better. You’ve simply gone from failure to failure without losing your enthusiasm.

Let them in on your secret. Teach them success isn’t flying — it’s falling with style.

I believe the biggest threat to your success is simply giving up.

Become a finisher with my short book QuitterProof: The 5 Beliefs of Highly Successful people.